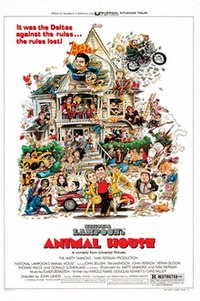 In 1962, Faber College freshmen Lawrence "Larry" Kroger and Kent Dorfman seek to join a fraternity. Finding themselves out of place at the prestigious Omega Theta Pi house's party, they visit the slovenly Delta Tau Chi house next door, where Kent is a "legacy": he cannot be rejected, because his older brother Fred was a member. John "Bluto" Blutarsky welcomes them, and they meet other Deltas, including motorcyclist Daniel Simpson "D-Day" Day, chapter president Robert Hoover, ladies' man Eric "Otter" Stratton, and Otter's best friend Donald "Boon" Schoenstein, whose girlfriend Katy is constantly pressuring him to stop drinking with the Deltas and do something with his life. Larry and Kent are invited to pledge and given the fraternity names "Pinto" and "Flounder" respectively, by Bluto, Delta's sergeant-at-arms.