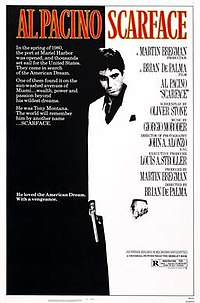 Scarface is a 1983 American crime film directed by Brian De Palma and written by Oliver Stone. Loosely based on the 1929 novel of the same name and serving as a loose remake of the 1932 film, it tells the story of Cuban refugee Tony Montana (Al Pacino), who arrives penniless in Miami during the Mariel boatlift and becomes a powerful and extremely homicidal drug lord. The film co-stars Steven Bauer, Michelle Pfeiffer, Mary Elizabeth Mastrantonio and Robert Loggia. De Palma dedicated this version of Scarface to the memories of Howard Hawks and Ben Hecht, the writers of the original film.

In 1980, Cuban refugee and ex-convict Tony Montana arrives in Miami, as part of the Mariel boatlift, where he is sent to a refugee camp with his best friend Manny Ray and their companions Angel and Chi-Chi. The four are released and given green cards in exchange for murdering a former Cuban general at the request of Miami drug lord Frank Lopez. They find work as dishwashers at a restaurant, but a dissatisfied Tony proclaims that he is meant for bigger things.