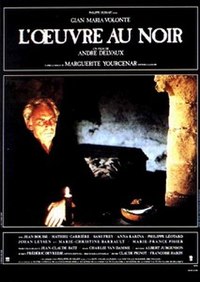 The Abyss is a 1988 drama film directed by André Delvaux. It was entered into the 1988 Cannes Film Festival. It is based on the novel of the same name by Marguerite Yourcenar. The film received the André Cavens Award for Best Film by the Belgian Film Critics Association (UCC).

The doctor and alchemist Zenon Ligre returns to his country of origin Flanders using false documentation, after spending his life traveling around Europe. In his hometown of Bruges, he finds work as a doctor in the convent of the Cordeliers. After founding a clinic and spa, he sets out to work as a doctor and alchemist for the poor. Zeno's ideology and methods were very popular among the Flemish population, but they ran the risk of being condemned by the Inquisition because they deviated from official orthodoxy. Having engaged in bisexual relations for several years, Zeno is accused of having homosexual relations with a young friar. Long sought after by authorities for his subversive writings, Zeno is arrested. He is tried by a court of the Inquisition and accused of witchcraft, murder, and unnatural relations. Rather than be burned at the stake, he prefers to choose his own death.