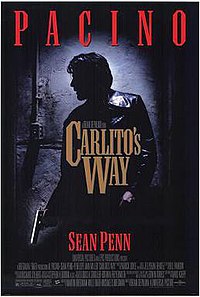 In 1975 New York, after having served five years of a 30-year prison sentence, career criminal Carlito Brigante is freed on a legal technicality exploited by his close friend and lawyer, Dave Kleinfeld. Carlito vows to end his unlawful activities but is persuaded to accompany his young cousin Guajiro to a drug deal held at a bar. Guajiro is betrayed and killed by his suppliers and Carlito is forced to shoot his way out. Later, Carlito takes Guajiro's $30,000 from the botched deal and uses it to buy into a nightclub owned by a gambling addict named Saso with the intention of saving $75,000 to retire to the Caribbean.