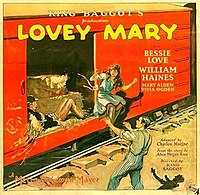 Lovey Mary is a 1926 American comedy-drama film directed by King Baggot, with Bessie Love in the title role. It is based on the 1903 novel of the same name by Alice Hegan Rice, a sequel to Rice's Mrs. Wiggs of the Cabbage Patch. It was distributed by Metro-Goldwyn-Mayer.

Lovey Mary (Love) runs away from an orphanage with Tommy (Combs) so that he will not have to return to his bad mother. Lovey and Tommy stay at the home of Miss Hazey (Ogden), who is about to marry a man whom she knows only from correspondence.