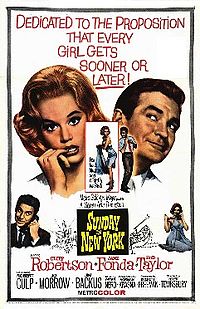 Sunday in New York is a 1963 American Metrocolor romantic comedy film directed by Peter Tewksbury and starring Jane Fonda, Rod Taylor and Cliff Robertson. The soundtrack score was composed and performed by Peter Nero; Mel Tormé recorded the vocals for the title song. The screenplay was written by Norman Krasna based on Krasna's play of the same name.

Eileen Tyler (Fonda), a 22-year-old music critic for the Albany Times Union, is suffering from her breakup with Russ (Robert Culp) from a rich Albany family. She comes to New York City to visit her brother Adam (Robertson), who is an airline pilot. Eileen confides to her brother that she thinks she may be the only 22-year-old virgin left in the world. Adam assures her that sex is not what all men look for and insists he hasn't slept around. Of course, Adam is lying and is in hot pursuit of a tryst with his occasional girlfriend Mona. However, Adam's date with Mona has a series of job-related interruptions. Meanwhile, Eileen decides to see if she can have some fun in New York, and seems to find the perfect candidate in Mike (Taylor), a man she meets on the bus. But things get complicated when Russ pops in with a proposal and a mistaken assumption. Mike later confesses to Eileen his feelings whereby she has a change of heart.