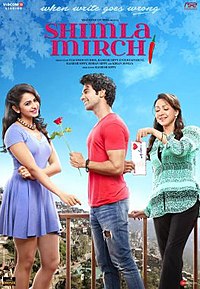 Shimla Mirchi is a 2020 Indian Hindi-language romantic drama film directed by Ramesh Sippy, starring Hema Malini, Rajkummar Rao and Rakul Preet Singh. It is jointly produced by Ramesh Sippy, Rohan Sippy and Kiran Juneja. The film had a 5 year delay due to no buyer to buy the film. It was theatrically released in India on 3 January 2020.

Avinash (Rajkummar Rao), former translator at Japanese Embassy in India, visits a temple with his family, where he meets beautiful Naina (Rakul Preet Singh) and falls for her. His family also encounters Naina in another scene and likes her very much and wants Avi to marry her. To court Naina, Avi stays around the temple and works at her coffee shop that is about to open.