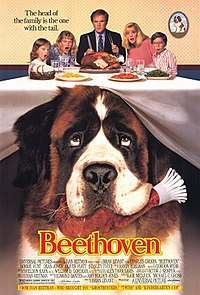 Beethoven is a 1992 American family comedy film, directed by Brian Levant and starring Charles Grodin and Bonnie Hunt as George and Alice Newton, respectively. It is the first installment of the Beethoven film series.

A group of puppies are stolen from a pet store by two thieves. A St. Bernard puppy escapes and sneaks into the Newton family's home. The workaholic father, George Newton, doesn't want the responsibility of owning a dog, but his wife, Alice, and their children, Ryce, Ted, and Emily, convince him. They give him the name “Beethoven” when Emily plays a portion of Ludwig van Beethoven's Fifth Symphony on the piano and the dog barks along to it.