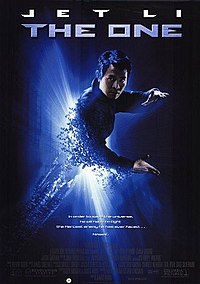 The One is a 2001 American science fiction action film directed by James Wong, written by Wong and Glen Morgan, and starring Jet Li, Delroy Lindo, Carla Gugino, and Jason Statham.

Gabriel Yulaw (Jet Li), once an agent of the MultiVerse Authority (MVA) which polices interdimensional travel, seeks to hunt down all variations of himself in alternate universes. By killing 124 versions of his other selves and absorbing their life energies, Yulaw believes that he will become a superpowered-godlike being called "The One".