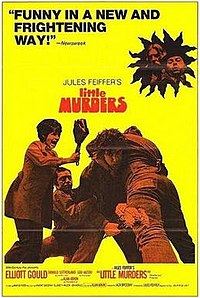 Little Murders is a 1971 black comedy film starring Elliott Gould and Marcia Rodd, directed by Alan Arkin in his feature directorial debut. Based on the play by Jules Feiffer, it is the story of a girl, Patsy (Rodd), who brings home her boyfriend, Alfred (Gould), to meet her severely dysfunctional family amidst a series of random shootings, garbage strikes and electrical outages ravaging their New York City neighborhood.

Patsy Newquist is a 27-year-old interior designer who lives in a New York City rife with street crime, noise, obscene phone calls, power blackouts and unsolved homicides. When she sees a defenseless man being attacked by street thugs, she intervenes, but is surprised when the passive victim doesn't even bother to thank her. She ends up attracted to the man, Alfred Chamberlain, a photographer, but finds that he is emotionally vacant, barely able to feel pain or pleasure. He permits muggers to beat him up until they get tired and go away.