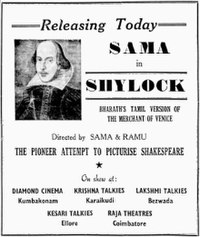 Shylock is a 1940 Indian Tamil-language film directed by Kinema Ramu and Serukalathur Sama (under the name Sama-Ramu) and produced by Bharat Pictures. It is based on William Shakespeare's play The Merchant of Venice, and features Sama as the title character. The film was released on 23 November 1940 and failed commercially. No print of it is known to survive, making it a lost film.