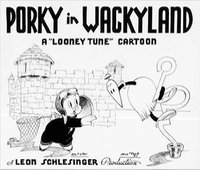 Porky in Wackyland is a 1938 Warner Bros. Looney Tunes animated short film, directed by Robert Clampett. The short was released on September 24, 1938, and stars Porky Pig.

A newspaper shows Porky Pig traveling to Africa to hunt the rare dodo bird, worth $4,000,000,000,000 p.s. 000,000,000 dollars. Porky uses his airplane to go to Dark Africa, then Darker Africa, and finally lands in Darkest Africa. When Porky lands, a sign tells him that he's in Wackyland ("Population: 100 nuts and a squirrel"), while a voice booms out "It ''can'' happen here!" Porky tiptoes along the ground in his airplane and he is greeted by a roaring beast, who suddenly becomes effeminate and dances away into the forest.