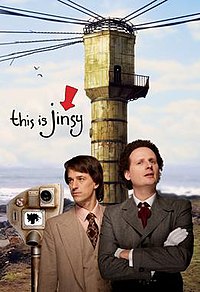 This is Jinsy is a British comedy series. The pilot was first broadcast on 1 March 2010 on BBC Three. The programme is about the bizarre residents of the fictional island of Jinsy which is based on Guernsey, where the two writers are from. The show was written by Chris Bran and Justin Chubb who also play the leading roles. Although the pilot episode was made for the BBC, the full series of eight episodes was picked up by Sky Atlantic. The first series began airing with a double bill on 19 September 2011 and ended on 31 October 2011. A second series was commissioned and was first broadcast on 8 January 2014.