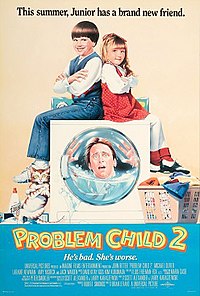 Problem Child 2 is a 1991 American black comedy film and a sequel to the 1990 film Problem Child; a continuation of the exploits of Junior (Michael Oliver), an adopted orphan boy who deliberately wreaks comedic havoc everywhere he goes. John Ritter returns as his adopted father, Ben Healy. Amy Yasbeck, who played Ben's wife, Flo, in the first movie, also returns, as school nurse Annie Young who's had a daughter named Trixie Young (Ivyann Schwan) who's also a problem child. It was produced by Robert Simonds, who also produced the first one. It was rated PG-13, unlike its predecessor, which was rated PG.

One year after their previous misadventures, Ben Healy (John Ritter) and his adopted son Junior (Michael Oliver) move from Cold River, Illinois to the quiet community of Mortville, Oregon to start over, following Ben and Flo's divorce. Moments after they arrive, dozens of women line up in their front yard, all wanting to date Ben.