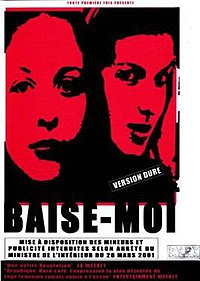 Baise-moi is a 2000 French crime thriller film written and directed by Virginie Despentes and Coralie Trinh Thi and starring Karen Lancaume and Raffaëla Anderson. It is based on the novel by Despentes, first published in 1993. The film received intense media coverage because of its graphic mix of violence and explicit sex scenes. Consequently, it is sometimes considered an example of the "New French Extremity."