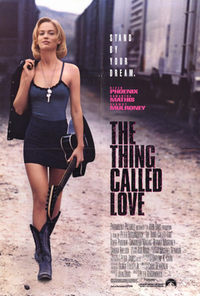 The Thing Called Love is a 1993 American comedy-drama film directed by Peter Bogdanovich and starring Samantha Mathis as Miranda Presley, a young musician who tries to make it big in Nashville. River Phoenix, Dermot Mulroney and Sandra Bullock also star. While the film involves a love triangle and various complications in Miranda's route to success, it provides a sweetened glimpse at the lives of aspiring songwriters in Nashville. Its tagline is: "Stand by your dream".

Miranda Presley is an aspiring singer/songwriter from New York City who loves country music and decides to take her chances in Nashville, where she hopes to become a star. After arriving in Music City after a long bus ride, Miranda makes her way to the Bluebird Cafe, a local watering hole with a reputation as a showcase for new talent. The bar's owner, Lucy, takes a shine to the plucky newcomer and gives her a job as a waitress.