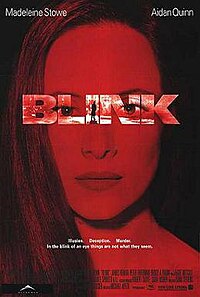 Blink is a 1993 American neo-noir thriller film starring Madeleine Stowe and Aidan Quinn. Director Michael Apted was nominated for a Crystal Globe award for the film at the Karlovy Vary International Film Festival, and screenwriter Dana Stevens was nominated for Best Motion Picture at the Edgar Allan Poe Awards. Emmy Award-winning actress Laurie Metcalf also had a role in the film. Chicago rock band The Drovers played a support role as themselves, contributing three songs to the soundtrack. Stowe's character, Emma, is a fiddler in the group. Some scenes were filmed in Chicago, Illinois.

Emma Brody is a young musician who has been blind for 20 years. New surgery techniques restore her vision but initially cause "vision flashes" that leave her uncertain about what she sees. One night, she is awakened by a noise in the apartment above. Peeking out her door, she "sees" a figure descending the stairs. She contacts the police, worried that her neighbor has been murdered, but is unsure whether it was just her new vision deceiving her. The killer then begins to stalk Emma.