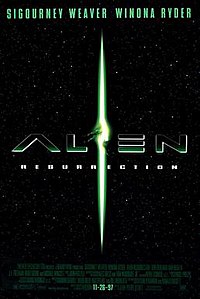 Alien Resurrection is a 1997 American science fiction horror film directed by Jean-Pierre Jeunet, written by Joss Whedon, and starring Sigourney Weaver and Winona Ryder. It is the fourth installment of the Alien film series and was filmed at the 20th Century Fox studios in Los Angeles, California.

In 2379, two hundred years after the events of Alien 3, military scientists on the space vessel USM Auriga create a clone of Ellen Ripley, designated Ripley 8, using DNA from blood samples taken before her death. The Xenomorph queen's DNA has been mixed in with Ripley's, so the clone grows up with an embryo inside it. The scientists extract the embryo, raise it, and collect its eggs while keeping Ripley 8 alive for further study. As a result of the Xenomorphs' DNA inside her, the clone has enhanced strength and reflexes, somewhat acidic blood, and a psychic link with the Xenomorphs. Additionally, the Xenomorph's genetic memory allows the clone to have some of Ripley's memories.