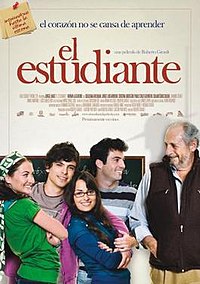 El estudiante is a 2009 Mexican film written and directed by Roberto Girault, and starring Jorge Lavat, Norma Lazareno, José Carlos Ruiz, Jeannine Derbez, Siouzana Melikián and Cristina Obregón. The film depicts the story of a 70-year-old man called Chano, who decides to go to university despite his age.

The story takes place in the city of Guanajuato. The story is about a 70-year-old man called Chano who decides to enroll in a university course in order to study literature. Chano tries to break the generation gap using his passion for Don Quixote. He clashes with the different traditions and they all share their dreams and experiences.