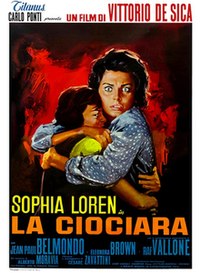 Two Women ( , rough literal translation "The Woman from Ciociaria") is a 1960 war drama film directed by Vittorio De Sica from a screenplay by Cesare Zavattini and De Sica, based on the novel of the same name by Alberto Moravia. The film stars Sophia Loren, Jean-Paul Belmondo, Eleonora Brown and Raf Vallone. It tells the story of a woman trying to protect her young daughter from the horrors of war. The story is fictional, but based on actual events of 1944 in Rome and rural Lazio, during the Marocchinate.

Cesira (Loren) is a widowed shopkeeper, raising her devoutly religious twelve-year-old daughter, Rosetta (Brown), in Rome during World War II. Following the bombing of Rome, mother and daughter flee to Cesira's native Ciociaria, a rural, mountainous province of central Italy. The night before they go, Cesira sleeps with Giovanni (Vallone), a coal dealer in her neighbourhood, who agrees to look after her store in her absence.