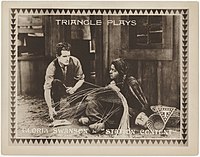 Station Content is a 1918 American silent drama film directed by Arthur Hoyt and starring Gloria Swanson. The original, five reel feature is presumed to be lost, but a one reel abridgment created in 1926 does survive and has been released on video.

As described in a film magazine, when Jim Manning (Hill) is rebuked by his wife Kitty (Swanson) for failure to secure a promotion that will take them away from Cybar, an isolated spot, he replies in kind, and the strained relations lead to Kitty running away with a musical comedy company. She meets Stephen Morton, president of the railroad, who becomes fascinated with her. He wishes to free himself from his wife and marry her, and Kitty promises an answer within a month. While returning to the city, she is held overnight at a small railroad station and memories fill her with remorse. She learns that lightning has destroyed a bridge on the train line, and after a wild ride on a gasoline handcar is able to save the limited. Morton and her husband Jim are both on the train, and a reconciliation between the couple is effected.