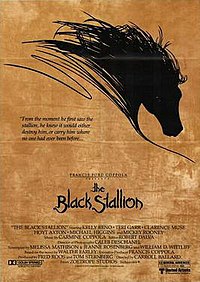 The Black Stallion is a 1979 American adventure film based on the 1941 classic children's novel of the same name by Walter Farley. The film starts in 1946, five years after the book was published. It tells the story of Alec Ramsey, who is shipwrecked on a deserted island with a wild Arabian stallion whom he befriends. After being rescued, they are set on entering a race challenging two champion horses.

In the summer of 1946, Alec Ramsey is travelling by steamer off the coast of North Africa, where he sees a wild black stallion being forced into a makeshift stable and heavily restrained by ropes leading to his halter. Captivated by the horse, Alec later sneaks to the horse to feed him some sugar cubes, but he is caught by the horse's supposed owner, who tells him in Arabic to stay away from Shetan and shoves the boy away.