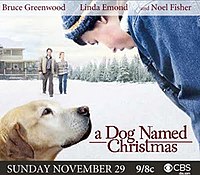 A Dog Named Christmas is a 2009 American/Canadian television film that debuted on CBS as a Hallmark Hall of Fame movie on November 29, 2009. The film was produced by Brent Shields, directed by Peter Werner and written by Jenny Wingfield, who based the script from a novel of the same name by Greg Kincaid.

A tale of a young man with a learning disability, named Todd McCray (Noel Fisher) living with his parents in the rural midwest. The story takes place over a two-week period over the Christmas holidays when the local animal shelter