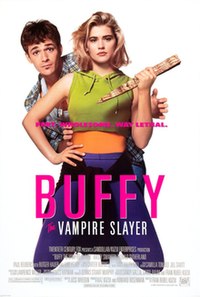 Buffy the Vampire Slayer is a 1992 American comedy horror film directed by Fran Rubel Kuzui and starring Kristy Swanson, Donald Sutherland, Paul Reubens, Rutger Hauer, Luke Perry, and Hilary Swank. It follows a Valley girl cheerleader named Buffy who learns that it is her fate to hunt vampires. It was a moderate success at the box office but received mixed reception from critics. The film was taken in a different direction from the one its writer Joss Whedon intended, and five years later, he created the darker and acclaimed TV series of the same name.

High school senior Buffy Summers (Kristy Swanson) attends Hemery High School in Los Angeles; her main concerns are shopping and spending time with her rich, snooty friends and her boyfriend, Jeffrey (Randall Batinkoff). While at school one day, she is approached by a man who calls himself Merrick (Donald Sutherland). He informs her that she is The Slayer, or Chosen One, destined to kill vampires, and he is a Watcher whose duty it is to guide and train her. She initially rejects his claim but is convinced that he's right when he's able to describe a recurring dream of hers in detail. In addition, Buffy is exhibiting uncanny abilities not known to her, including heightened agility, senses, and endurance, yet she repeatedly tries Merrick's patience with her frivolous nature, indifference to slaying, and sharp-tongued remarks.