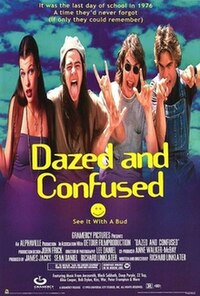 It is May 28, 1976, the last day of school at Lee High School in Austin, Texas. The next year's group of seniors are preparing for the annual hazing of incoming freshmen. Randall "Pink" Floyd, the school's star football player, is asked to sign a pledge promising not to take drugs during the summer or do anything that would "jeopardize the goal of a championship season". When classes end, the incoming freshman boys are hunted down by the seniors and paddled. The incoming freshman girls are also hazed; they are rounded up in the school parking lot by senior girls, covered in mustard, ketchup, flour and raw eggs and forced to propose to senior boys.