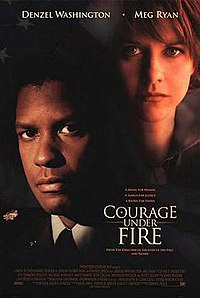 Courage Under Fire is a 1996 American war film directed by Edward Zwick, and starring Denzel Washington and Meg Ryan. It is the second collaboration between Washington and director Zwick. The film was released in the United States on July 12, 1996 to positive reviews and grossed $100 million worldwide.

While serving in the Gulf War, Lieutenant Colonel Serling (Denzel Washington) accidentally destroys one of his own tanks during a confusing night-time battle, killing his friend, Captain Boylar (Tim Ransom). The U.S. Army covers up the details and transfers Serling to a desk job.