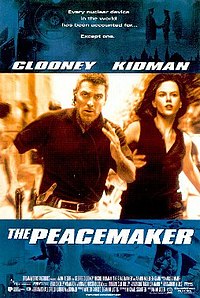 The Peacemaker is a 1997 American action thriller film starring George Clooney, Nicole Kidman, Armin Mueller-Stahl and Aleksandr Baluev and directed by Mimi Leder. It is the first film by DreamWorks Pictures. While the story takes place all over the world, it was shot primarily in Slovakia with some sequences filmed in New York City and Philadelphia.

In an Eastern Orthodox church in Pale, Bosnia and Herzegovina, the Bosnian Minister of Foreign Affairs is murdered after being paged to meet a colleague of a fellow member of the Bosnian Parliament outside.