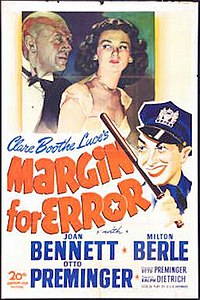 Margin for Error is a 1943 American drama film directed by Otto Preminger. The screenplay by Lillie Hayward and Samuel Fuller is based on the 1939 play of the same title by Clare Boothe Luce.

When police officer Moe Finkelstein (Milton Berle) and his colleague Officer Salomon are ordered to serve as bodyguards to German consul Karl Baumer (Otto Preminger) by the mayor of New York City, Finkelstein turns in his badge, convinced he has to quit the service because the man is a Nazi. Capt. Mulrooney, who appointed them to this job, tells Moe that although the mayor personally is opposed to Adolf Hitler and his regime, the mayor is responsible for the safety of everybody, and he believes that through this assignment Finkelstein can show them the difference between their system and the Nazi one.