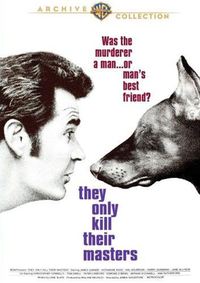 They Only Kill Their Masters 1972

They Only Kill Their Masters is a 1972 American mystery film directed by James Goldstone, written by Lane Slate, and starring James Garner and Katharine Ross, with a supporting cast featuring Hal Holbrook, June Allyson, Tom Ewell, Peter Lawford, Edmond O'Brien, and Arthur O'Connell. The title refers to Doberman dogs that might have been responsible for a woman's murder currently under investigation by the local police chief (Garner).

In the sleepy California coastal town of Eden Landing, police chief Abel Marsh returns from vacation to learn that divorcée Jenny Campbell has been killed by her pet Doberman on the shore of her beachfront home.