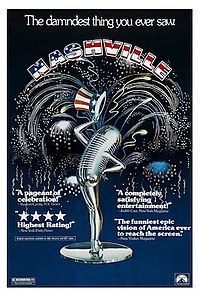 Nashville is a 1975 American satirical musical ensemble comedy-drama film directed by Robert Altman. The film follows various people involved in the country and gospel music businesses in Nashville, Tennessee, over a five-day period, leading up to a gala concert for a populist outsider running for President on the Replacement Party ticket.

Hal Philip Walker, Replacement Party candidate in the 1976 United States presidential election, arrives in Nashville for a fundraising gala. Meanwhile, country superstar Haven Hamilton records a patriotic song commemorating the Bicentennial. Opal, an Englishwoman who claims to be working on a documentary for the BBC, attempts to listen in on the sessions. Later that day, country singer Barbara Jean returns to Nashville following a burn accident, and is greeted at Berry Field by local industry elites, including Haven and his companion, Lady Pearl, a nightclub owner. Also present are Pfc. Glenn Kelly, who is obsessed with Barbara Jean, and a popular folk trio consisting of married couple Bill and Mary, and guitarist Tom, who are in town to record an album. Meanwhile, Martha, a teen groupie going by the name "L.A. Joan," is picked up by her uncle, Mr. Green, at the airport; she has arrived to visit her dying aunt Esther, but covertly plans to pursue musicians. In the airport cafe, African-American cook Wade Cooley and his co-worker, a waitress named Sueleen, discuss her aspirations to become a singer.