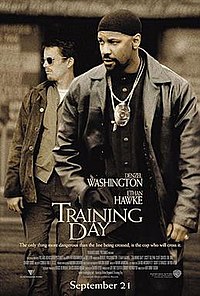 Los Angeles Police Department Officer Jake Hoyt is assigned for an evaluation headed by Detective Sergeant Alonzo Harris, a decorated narcotics officer. Alonzo is known to be a corrupt cop to several other narcotics officers who are also in on the take. Alonzo and Jake begin the day by catching some college kids buying cannabis. Confiscating the drugs from the kids, Alonzo tells Jake to smoke it. Jake refuses initially, but complies when Alonzo threatens him at gunpoint.