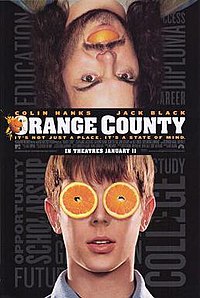 Orange County is a 2002 American comedy film starring Colin Hanks and Jack Black. It was released on January 11, 2002. The movie was distributed by Paramount Pictures and produced by MTV Productions and Scott Rudin. The movie was directed by Jake Kasdan and written by Mike White.

Shaun Brumder (Colin Hanks) is an intelligent teenager from affluent Orange County, California with little interest in his education, leading a carefree SoCal lifestyle of surfing, drinking, and partying. Shaun's best friend Lonny (Bret Harrison) is killed in a surfing accident, leading Shaun to rethink his life. He finds a novel on the beach by the author Marcus Skinner, which inspires him to become a writer. Upon learning that Skinner is an English professor at Stanford University, Shaun makes it his goal to attend Stanford and study under him.