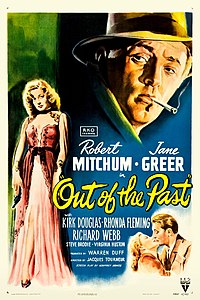 Out of the Past (billed in the United Kingdom as Build My Gallows High) is a 1947 film noir directed by Jacques Tourneur and starring Robert Mitchum, Jane Greer, and Kirk Douglas. The film was adapted by Daniel Mainwaring (using the pseudonym Geoffrey Homes) from his novel Build My Gallows High (also written as Homes), with uncredited revisions by Frank Fenton and James M. Cain.

Joe Stefanos is hired muscle for “big operator” Whit Sterling, a former New York City gambling kingpin relocated to Lake Tahoe. He arrives in a rural mountain town in the California Sierra Nevada looking to hook up with someone from their past.