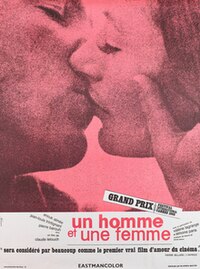 A Man and a Woman is a 1966 French film written and directed by Claude Lelouch and starring Anouk Aimée and Jean-Louis Trintignant. Written by Lelouch and Pierre Uytterhoeven, the film is about a young widow and widower who meet by chance at their children's boarding school and whose budding relationship is complicated by the memories of their deceased spouses. The film is notable for its lush photography, which features frequent segues among full color, black-and-white, and sepia-toned shots, and for its memorable musical score by Francis Lai.

A young widow, Anne Gauthier (Anouk Aimée), is raising her daughter Françoise (Souad Amidou) alone following the death of her husband (Pierre Barouh) who worked as a stuntman and who died in a movie set accident that she witnessed. Still working as a film script supervisor, Anne divides her time between her home in Paris and Deauville in northern France where her daughter attends boarding school. A young widower, Jean-Louis (Jean-Louis Trintignant), is raising his son Antoine (Antoine Sire) alone following the death of his wife Valerie (Valerie Lagrange) who committed suicide after Jean-Louis was in a near fatal crash during the 24 Hours of Le Mans. Still working as a race car driver, Jean-Louis divides his time between Paris and Deauville where his son also attends boarding school.