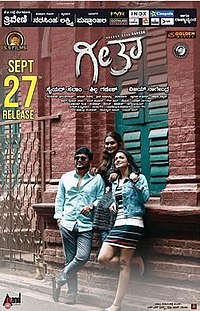 Geetha is a 2019 Indian Kannada action drama film written and directed by debutant Vijay Naagendra starring Ganesh, Shanvi Srivastava and Prayaga Martin in lead roles. Anup Rubens is scoring and composing music for the movie. Shreesha Kuduvalli is the DOP and Jnaanesh B Matad is the editor. The film derives its name from 1981 Kannada classic Geetha directed by Shankar Nag, however, the film team has clarified the content is very different and revolves around the famous Gokak Agitation.

Set against the backdrop of the Gokak Chaluvali (the language rights agitation in the 1980s in Karnataka), this movie tells the story of Akash and Geetha whose paths keep crossing as they bump into each other at different stages of their lives.