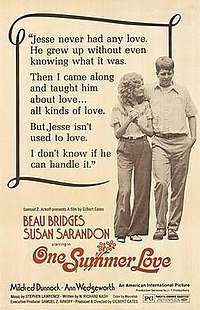 One Summer Love, originally titled Dragonfly, is a 1976 romantic drama film directed by Gilbert Cates from a screenplay by N. Richard Nash. It stars Beau Bridges and Susan Sarandon and features Mildred Dunnock and Ann Wedgeworth.

After being released from a mental hospital, Jesse (Bridges) sets out to find and rejoin his off-beat family. While doing so, he meets a pretty young woman named Chloe (Sarandon) who works in a movie theatre, and they fall in love, which resolves his psychological problems.