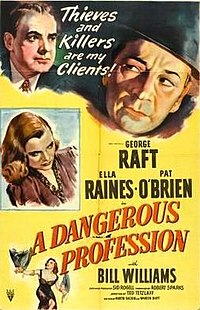 The story begins as Police Lt. Nick Ferrone (Jim Backus) explains what bail bondsmen do and tells the viewers the setting is Los Angeles. One such man is Vince Kane (George Raft), a former police detective who worked with Ferrone. When one of his customers, Claude Brackett (Bill Williams), is murdered, Kane decides to investigate. He has two reasons for investigating: the curiosity of a former cop and it seems that he has fallen in love with Brackett's widow Lucy, an old flame.