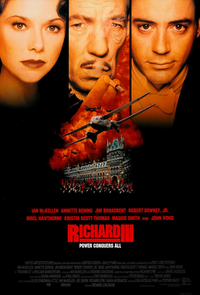 Richard III is a 1995 British/American film adaptation of William Shakespeare's play of the same name, directed by Richard Loncraine. The film adapts the play's story and characters to a setting based on 1930s Britain, with Richard depicted as a fascist plotting to usurp the throne.

In a fictitious timeline of England in the late 1930s, a chaotic and bloody civil war (which occurs 450 years later than the actual historical event) ends with Lancastrian King Henry and his son Prince Edward assassinated by Field Marshal Richard Gloucester of the rival faction supported by the House of York. Richard's elder brother Edward York becomes King. Richard is determined to take the crown, and pits King Edward against his brother, George Clarence, who is imprisoned under a sentence of death. Richard deceives and marries Prince Edward's widow Lady Anne Neville.