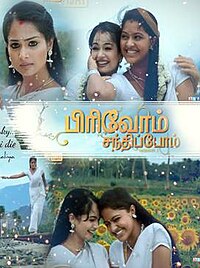 Pirivom Santhippom (season 2) is a Tamil Family Romance Mini soap opera that aired Monday through Friday on STAR Vijay from 12 November 2012 to 11 January 2013 at 7:00PM IST for 41 episodes. Due to bad ratings and feedback, STAR Vijay had ended the serial.

The story Jothi (Rachitha Mahalakshmi) as a widow who is angry with Revathy (Kalyani) and Revathy who badly wants to break the wall between her and Jothi. Jothi wants to punish the people who have caused her husband's death and promises to show no mercy to them when found.