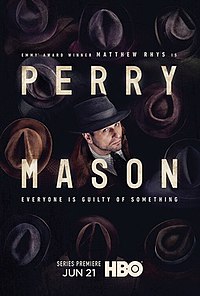 Perry Mason is an American period drama television series based on the character of the same name created by Erle Stanley Gardner which premiered on June 21, 2020, on HBO. The series was developed and written by Rolin Jones and Ron Fitzgerald and stars Matthew Rhys in the title role. In July 2020, the series was renewed for a second season.

The series focuses on the origin story of famed defense lawyer Perry Mason. In 1932, Los Angeles is prospering while the rest of the U.S. is recovering from the grip of the Great Depression. Down-and-out private investigator Perry Mason is struggling with his trauma from The Great War and being divorced. He is hired for a sensational child kidnapping trial and his investigation portends major consequences for Mason, his client, and the city itself.