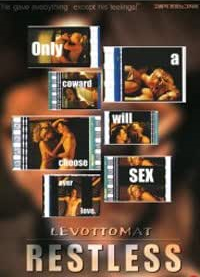 Restless is a Finnish romantic film directed by Aku Louhimies and released in 2000. It was entered into the 22nd Moscow International Film Festival. The sex scenes in the film sparked uproar and disapproval from the audience and critics after the release.

The film is about Ari (Mikko Nousiainen), a 27-year-old ambulance doctor with a terminally ill mother. One-night stands are his main pastime. He doesn't want to meet any of the girls again because he is certain that commitment equals pain. But one day Ari realises that he can't feel anything at all. Then he meets a woman named Tiina (Laura Malmivaara) on the beach. That same day they have sex in Ari's apartment and Tiina enters her phone number into Ari's in order to exchange contact details. At first Ari ignores Tiina's attempts to phone him to the amusement of his married colleague, Roope. Ari subsequently relents and they start dating each other reaching the point where Tiina, falling in love, begins to look for commitment. However, on Ari's birthday when Tiina brings him a cake to his apartment she arrives as another woman is leaving. Nonetheless she decides to maintain the relationship with him though expressing her desire for exclusivity.