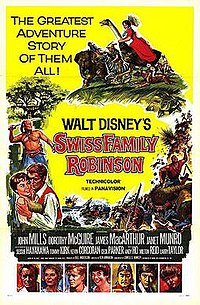 Swiss Family Robinson is a 1960 American adventure film starring John Mills, Dorothy McGuire, James MacArthur, Janet Munro, Tommy Kirk, and Kevin Corcoran in a tale of a shipwrecked family building an island home. It was the second feature film based on the 1812 novel The Swiss Family Robinson by Johann David Wyss, a previous adaptation having been released by RKO Pictures in 1940. Directed by Ken Annakin and shot in Tobago and Pinewood Studios outside London, it was the first widescreen Walt Disney Pictures film shot with Panavision lenses; when shooting in widescreen, Disney had almost always used a matted wide screen or filmed in CinemaScope.

A Swiss family from Bern—Father, Mother, and their three sons—are relocating to a colony in New Guinea to escape the Napoleonic Wars when their ship is attacked by pirates and flees into a storm. The crew abandons ship, leaving the family on board, and the ship grounds on rocks off an uninhabited island. The family makes their way ashore along with the captain's two Great Danes. Father, eldest son Fritz, and middle son Ernst salvage supplies and livestock from the shipwreck. The pirates locate the ship, but Father scares them off by putting up a quarantine flag, signaling disease aboard.