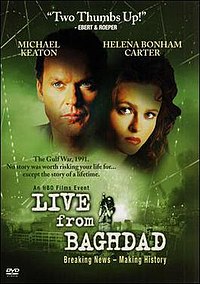 Live from Baghdad is a television movie produced in 2002 by HBO. It was directed by Mick Jackson and co-written by Robert Wiener based on Wiener's book of the same title. The movie was released during the prelude stage of the Iraq War.

On August 2, 1990, Iraqi forces and tanks roll into Kuwait City, as the Iraqi invasion of Kuwait begins. In Atlanta, CNN picks Robert Wiener (Michael Keaton) and his crew to go to Baghdad and cover the invasion. At Rome International Airport, Wiener meets his colleague and producer Ingrid Formanek (Helena Bonham Carter). Wiener and his crew arrive in Baghdad on August 23, and stay at the Al-Rasheed Hotel.