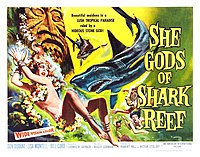 She Gods of Shark Reef is a 1958 B-adventure film directed by Roger Corman that was partially filmed on location in Kaua'i back to back with Thunder over Hawaii in 1956. The film was distributed in 1958 by American International Pictures as a double feature with Night of the Blood Beast.

A young and reckless criminal, Jim (Don Durant), stows away on his brother Chris Johnston's (Bill Cord) boat after killing two men interrupting his gun running. As they sail out to the Sulu Sea they are caught in a terrible storm and are shipwrecked off a beautiful island that is inhabited by a secretive all female village of pearl divers. Though the lonely and beautiful women of the island are friendly and flirtatious with the two brothers (the only remaining survivors), the village elder Queen Pua (Jeanne Gearson) is cautious and hostile, wanting the two off the island as soon as possible. Chris falls in love with one of the island beauties, Mahia (Lisa Montell), while Jim, being a wanted man, seeks to escape before the naval ship sent to rescue them arrives. Terrified of being recognized and executed for his crimes, Jim fixes one of the islanders' broken boats and lets his brother and his forbidden love in on his plan. But before they can leave, the black-hearted criminal is overcome by greed and steals the islanders' precious pearls, injuring a native in the process. Once out to sea Chris discovers what his sibling has done and tries to stop him in a fight on some jagged rocks. Jim tries to get away, but he gets tangled in the boats ropes and falls to the sea, where the shark kills him, finally punishing him for his crimes.