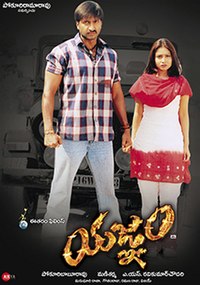 Yagnam is a 2004 Indian Telugu-language action film produced by Pokuri Babu Rao on the Eetharam Films banner, directed by AS Ravi Kumar Chowdary. It was released on 2 July 2004. It stars Gopichand and Moon Banerjee, with music composed by Mani Sharma. This film was remade in Oriya as Mo Mana Khali tori Pain, starring Sidhanta and Bijay Mohanty, and in Tamil as Mannin Maindhan, with Sibiraj and Sathyaraj. The film was also later dubbed into Hindi as Aaj Ka Raavanraaj in 2007.

Seenu (T. Gopichand) is a loyal servant and the right-hand-man of faction leader Reddeppa (Devaraj). He and Sailaja (Moon Banerrjee), Reddeppa's daughter, grew up together. Nayudamma (Vijaya Rangaraju) is an archrival of Reddeppa. Factional feuds between them have resulted in the loss of a number of lives among their groups. When Reddeppa realizes that his daughter and Seenu are in love, he swings into action, trying to kill Seenu. The rest of the story is about how Seenu secures Sailaja's hand in marriage and how he unites the forces of followers in both the warring groups to teach their masters (Reddeppa and Nayudamma) a lesson or two.