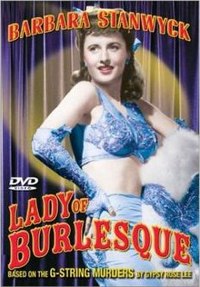 Lady of Burlesque (also known as The G-String Murders and in the UK, Striptease Lady) is a 1943 American musical comedy-mystery film directed by William A. Wellman and starring Barbara Stanwyck and Michael O'Shea. It is a faithful, if sanitized, adaptation of the 1941 novel The G-String Murders written by strip tease queen Gypsy Rose Lee.

The backstage plot concerns the murder of two strippers of a New York City burlesque theatre and the unmasking of the killer.