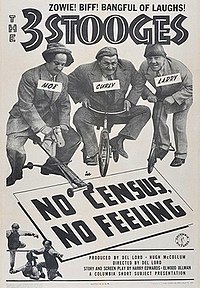 No Census, No Feeling is a 1940 short subject directed by Del Lord starring American slapstick comedy team The Three Stooges (Moe Howard, Larry Fine and Curly Howard). It is the 50th entry in the series released by Columbia Pictures starring the comedians, who released 190 shorts for the studio between 1934 and 1959.

The Stooges are caught sleeping in a closed awning situated over a store. A brief argument among the trio results in Curly casually tossing a pot over his shoulder, breaking several dishes. The shopkeeper (Max Davidson), irate at the Stooges for vandalizing his store, calls the police and chases the Stooges, who quickly dash into a building’s revolving door. Upon exiting the building, the Stooges have clipboards in tow, having inadvertently landed jobs as census takers.