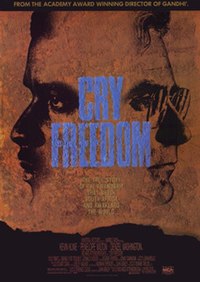 Cry Freedom is a 1987 epic drama film directed and produced by Richard Attenborough, set in late-1970s apartheid-era South Africa. The screenplay was written by John Briley based on a pair of books by journalist Donald Woods. The film centres on the real-life events involving black activist Steve Biko and his friend Donald Woods, who initially finds him destructive, and attempts to understand his way of life. Denzel Washington stars as Biko, while actor Kevin Kline portrays Woods. Cry Freedom delves into the ideas of discrimination, political corruption, and the repercussions of violence.

Following a news story depicting the demolition of a slum in East London in the south-east of the Cape Province in South Africa, liberal journalist Donald Woods (Kevin Kline) seeks more information about the incident and ventures off to meet black activist Steve Biko (Denzel Washington), a leading member of the Black Consciousness Movement. Biko has been officially ''banned'' by the Government of South Africa and is not permitted to leave his defined 'banning area' at King William's Town. Woods is opposed to Biko's banning, but remains critical of his political views. Biko invites Woods to visit a black township to see the impoverished conditions and to witness the effect of the Government-imposed restrictions, which make up the apartheid system. Woods begins to agree with Biko's desire for a South Africa where blacks have the same opportunities and freedoms as those enjoyed by the white population. As Woods comes to understand Biko's point of view, a friendship slowly develops between them.