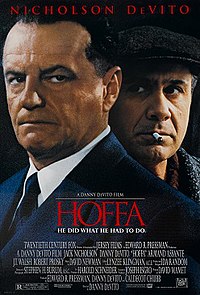 Hoffa is a 1992 American biographical crime film directed by Danny DeVito and written by David Mamet, based on the life of Teamsters leader Jimmy Hoffa. Most of the story is told in flashbacks before ending with Hoffa's mysterious disappearance. Jack Nicholson plays Hoffa, and DeVito plays Robert Ciaro, an amalgamation of several Hoffa associates over the years. The film features John C. Reilly, Robert Prosky, Kevin Anderson, Armand Assante, and J. T. Walsh in supporting roles. The film was distributed by 20th Century Fox and released on December 25, 1992. The film received mixed reviews and grossed just $29 million against its $35 million budget.

On July 30, 1975, Jimmy Hoffa and his longtime friend Bobby Ciaro are impatiently waiting in the parking lot of a roadhouse diner. The film moves in vignettes from Hoffa's early years, when Hoffa was a Teamsters union organizer working for the various trucking firms and laundries around Detroit, Michigan. Hoffa's life since 1935, when still young, over the four preceding decades gradually unfolds. Approaching a parked truck, inside of which driver Ciaro is taking a nap, Hoffa pitches the benefits of joining the Teamsters and gives Ciaro a business card, on which he has written: "Give this man whatever he needs." A few days later Ciaro reports to work to find Hoffa attempting to organize the workers there to join the Union. Hoffa blurts out they'd ridden 85 miles together, and Ciaro is fired. He later accosts Hoffa with a knife, but Hoffa's associate Billy Flynn pulls a gun on Ciaro, who drops the knife. Ciaro joins the pair in the arson of a laundry whose owner refuses to cooperate with the Teamsters. The arson gets out of control, severely burning Flynn, who dies. He is succeeded by Ciaro as Hoffa's right-hand man.