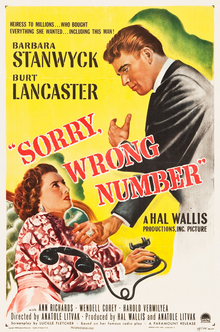 Sorry, Wrong Number is a 1948 American thriller film noir directed by Anatole Litvak and starring Barbara Stanwyck and Burt Lancaster. It tells the story of a woman who overhears a murder plot. The film was adapted by Lucille Fletcher from her 1943 radio play. Stanwyck was nominated for the Academy Award for Best Actress.

Leona Stevenson is the spoiled, bedridden daughter of wealthy businessman James Cotterell. One day, while listening to what seems to be a crossed telephone connection, she hears two men planning a woman's murder. The call cuts off without Leona learning very much other than it is scheduled for 11:15pm, when a passing train will hide any sounds. She calls the telephone company and the police, but with few concrete details, they can do nothing. Complicating matters, her husband Henry is overdue and their servants have the night off, leaving her all alone in a Manhattan apartment.